Why this family is speaking up about mental health

“I’ve lost the two most important men in my life”

John Migas’ story is devastating. And yet, it’s one that needs to be told.

In 2013, John’s older brother and best friend, Steve, took his own life.

Recalling the last moments he spent with Steve, John says, “it couldn’t have been more normal.” They played FIFA, “had a laugh”, then John drove his brother to the airport and Steve flew up north for work.

A few days later, the Migas family received the news.

Steve had never shown any signs of struggling with his mental health; his suicide was total shock.

“I just find it really hard that he’s not around anymore,” says John. “I loved him. I still love him.”

Losing someone to suicide is unimaginable but, unfortunately, it’s not uncommon.

There are more than eight deaths to suicide every day day in Australia.

Suicide is the leading cause of death among people aged 15-44 years old.

“That’s why I want to communicate to people to speak up and reach out,” says John. “I would hate for any other family to go through what we’ve had to go through.”

While his mum (the "strongest person" John knows) put on a brave face for the rest of the family, John’s dad “didn’t look after himself” and eventually passed away from a heart attack.

This was in 2017, four years after Steve’s death and only eight weeks before John’s first child, Jack, was born.

“He was such a selfless person, my Dad, he cared about everyone else a lot more than himself,” says John. But, after Steve died, John’s dad let his own mental and physical health slide.

“I never really understood why,” admits John. “[My dad] still had two kids to live for but he dwelled on Steve for so long that he couldn’t get past it.”

Over the last year, in developing a relationship with his own son, John has been able to grasp what his father went through. “I just don’t know how I could deal with losing Jack,” he says.

Although John feels that his family “has never been the same” since his brother’s passing, there is something positive that has come out of these turbulent years.

“Now, mental health and raising awareness is a big part of our lives,” says John’s wife, Tarnee. “It’s part of our family dynamic.”

John is still coming to terms with the deaths in his family, but he tries to be open about how he’s feeling. He has his “tough days” but speaks out to his friends and family. 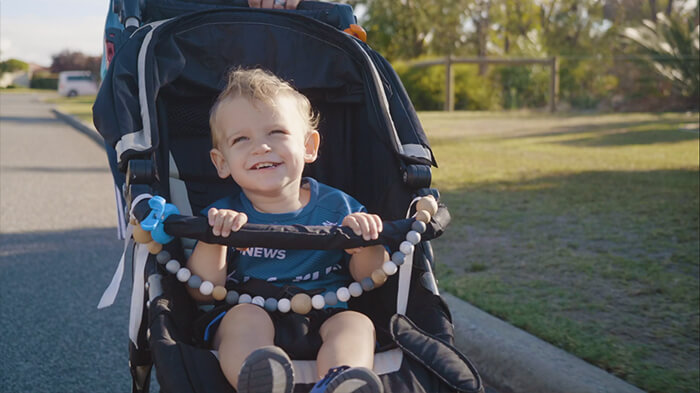 He and Tarnee are also raising Jack with an honest outlook on mental health. They want their son to know that he doesn’t have to “fight this battle on his own” – there are people around him “ready to listen”.

For them, mental health and physical health are intertwined.

When John’s grief became overwhelming, he started running. As well as helping him feel better physically, running changed his headspace.

“As I run, I think about everything,” says John. “Steve, my dad, the future with Jack and Tarnee.”

“It clears my head and puts me in a better mood. I feel like I’ve got my life back on track through exercise and running.”

In 2014, a year after Steve passed away, John participated in HBF Run for a Reason with a group of 30-40 friends and family. Through this and other fundraising efforts, they raised over $50,000 for Lifeline WA.

Now Lifeline WA ambassadors, John and Tarnee will be taking part in the event for the fourth time. John is stepping down from the half marathon course that he completed last year and will be running the 12km, while Tarnee will walk the 4km with Jack. 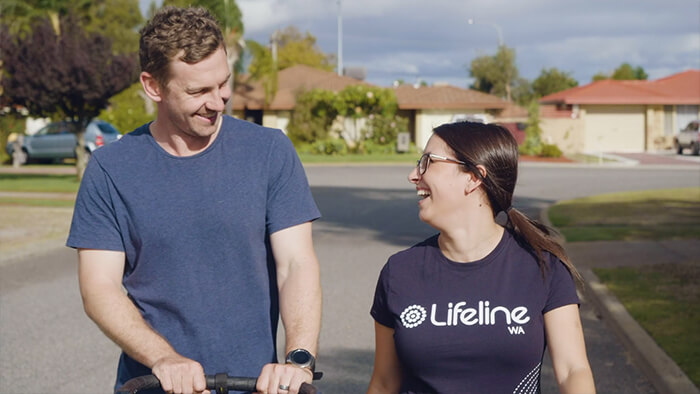 Are their fundraising and awareness efforts making a difference?

“I definitely feel like people in my circle are becoming more aware and are speaking up,” says John.

And how can friends and families help each other through difficult times?

“People put on a mask and try and cover up how they’re actually feeling,” says Tarnee, “so it’s important to ask, ‘Are you ok? How are you going?’ And listen, hear what they have to say, that can make all the difference.”

“Keep an eye out for the signs,” adds John.

If someone you know well is acting differently – being more distant, giving blunt answers and turning down invites – John suggests reaching out to them and keeping them on your radar.

“You might catch someone on a bad day when they don’t want to talk. But keep trying.”

If this article or video has brought up any issues for you, you can find help by calling Lifeline on 13 11 14 (available 24/7) or using their Online Crisis Chat service (available 7pm-12am, 7 days a week).